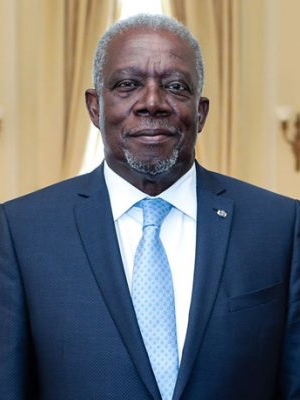 Hervé H. Denis is a career Haitian diplomat with forty years of experience in Public Administration and Business. Educated in Haiti and abroad, Mr. Denis’ career as a civil servant began in 1969 when he joined the General Accounting Inspector Service as an auditor. He was promoted to Deputy General Inspector of the State Public Enterprises. In 1976, he was appointed Vice-Consul of Haiti in Montreal, Canada.

Recently, he served as Minister of Defense from 2017 to 2018. In 1985, Denis briefly served as the Minister of Labor and Social Affairs. During that time, he engaged in intensive dialogue with various labor and business groups and worked to reform the State Pension Fund.

Beyond his government experience, Ambassador Denis is also an expert in plastic recycling having worked for many years in that field in Canada. First, as President of Plastic Deba Inc, and later as consultant for RPM Inc., a company affiliated to the Métivier Group (IPL) based in St-Damien, Quebec, Canada.

Denis graduated in 1971 from the School of Higher International Studies in Haiti and completed a degree in Management in Bordeaux, France in 1973. He later went to University Laval in Quebec, Canada, to study for a Masters in Business Administration.

Ambassador Denis has represented Haiti at a number of international symposiums and conferences dealing with issues such as trade, social welfare and bilateral negotiations and presided over the Haitian delegation to the Central American Conference of Labor Ministers convened in 1985 in Costa Rica and the Conference for the Celebration of the 500th anniversary of the discovery of America in Santo Domingo, Dominican Republic in 1984.

In 1992, Ambassador Denis emerged as an entrepreneur in Haiti and Canada dealing with import-export, tourism and hospitality management. He has been elected recently as the President of the Chamber of Commerce of Haiti and the Chamber of West after serving for four consecutive mandates as an advisor. He is also a co-founder and member of the board of the Haitian Canadian Chamber of Commerce, a partner in Hotel Visa Lodge, IDLCO, S.A., GESTASA and Gonâve 2000 S.A., a company dedicated to develop a tourist complex in the Island of Gonâve.

Throughout his career, Ambassador Denis has received several awards and decorations including the National Order and Merit of Haiti, the Order of Malta and the Order of St-Jean de Jerusalem. He is a Rotarian since 1994 and past President of Delmas/Aéroport Club for the years 2003-2004 and 2010-2011, Salvation Army Advisory Board Chairman.

He is married and has one son and one daughter.