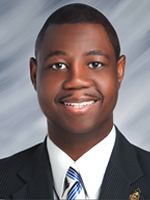 Councilman Alix Desulme believes that one of the most critical aspects of Public Service is giving back to the community. As a leader, he consistently advocates for the residents in North Miami and South Florida.

Tuesday, June 2, 2015, Councilman Desulme was elected to the North Miami City Council representing District 4. The following year he became the youngest Councilman to serve as Vice-Mayor for the city of North Miami, Florida (2016-2017).

Within his first year in office, Vice Mayor Desulme introduced legislation which passed unanimously to create the designation of the first Chinatown in the state of Florida. This project is an economic development aiming to position itself as a regional gateway within the State of Florida for Chinese investment and commerce by transforming the underperforming NW 7th Avenue Corridor into a regional anchor to promote traditional Chinese architecture, culture, commerce, and innovation.

Chinatown North Miami will provide a new type of development based on traditional urbanism principles that will cater to new markets: Chinese investors and other multi-cultural and ethnic backgrounds, millennial professionals, singles and families, and aging Baby Boomers. Attractive and financially adequate mixed‐use, flexible building types for business and housing.

Another significant piece of legislation Councilman Desulme championed is a city-wide program that improves the quality of lives for seniors 55+ living in the City. September 30, 2015, the North Miami City Council unanimously approved the NOMI Golden Silver Senior Program which provides a safe place to socialize, exercise, outings, and enjoying hot meals in a friendly environment.

As an educator, Councilman Desulme has championed for youth causes for two decades. He is known for his dedication to the city youth.

He designed and developed NoMi Leaders in Training Program (L.I.T.). L.I.T prepares the city’s next generation of public servants through higher education preparation, career readiness, and an enhanced understanding of local civic processes.

Additionally, it serves as a pre-requisite for students who reside in North Miami grades 9-12, to transition into the city’s signature Youth Opportunity Board (YOB) Summer Internship Program.

Upon completing the program’s hands-on professional leadership training, participants will gain soft skills needed to succeed in any profession and become a productive member of society. Councilman Desulme was first elected into office in 2009, in a city-wide election, making history as the first Black City Clerk of the City of North Miami. He held the distinction of the youngest and the first Haitian-American elected City Clerk in the United States of America.

Currently, Councilman Desulme is an Adjunct professor at St. Thomas University in Miami-Gardens, Florida and an Educational Consultant for ELB Global an Interactive Education Technology Solution provider based in California. Recently, Councilman Desulme has completed coursework at the University of New England towards a doctoral degree in Educational Leadership finishing his dissertation by December 2017.