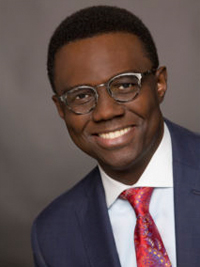 Delle Joseph is Senior Vice President within the Corporate Banking Group for TD Bank in South Florida. Delle has been working in Banking and Accounting in the South Florida community for over 20 years. His entire professional career has been focused on helping businesses grow across all industries. Prior to joining TD Bank, Delle served as First Vice President for Government & Institutional Banking at SunTrust Bank.

Delle has been and remains very involved in the South Florida community as a co-founder of the Town of Cutler Bay and current Treasurer of the Miami-Dade Community Action Agency (CAA) Board of Directors. Delle is a Board Member of the Haiti Development Institute (HDI) which is an initiative of the Boston Foundation; and also served on the South Florida American Diabetes Association Board.

Delle was honored by the South Florida Business Journal as one of the Journal’s 40 Under 40 best and brightest business professionals in South Florida for 2013.
Delle holds a Master’s of Science in Finance degree from Florida International University and received his undergraduate degree from Boston University. Delle is also a licensed Certified Public Accountant in the State of Florida and a member of the Florida Institute of Certified Public Accountants (FICPA).