Chairman and principal shareholder of the privately-owned Digicel Group 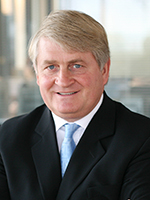 Denis O’Brien is an Irish serial entrepreneur and philanthropist. O’Brien is chairman and principal shareholder of the privately-owned Digicel Group, one of the fastest growing communications providers in the world. The company is a Digital Operator delivering digital experiences via its suite of 8 apps.

O’Brien founded Digicel in 2001 when the company launched a GSM cellular phone service in the Caribbean. The Digicel Group has extended its operations to more than 30 markets with over 14 million subscribers in the Caribbean, Central America and Asia Pacific regions.

O’Brien is one of Ireland’s most prolific entrepreneurs with investments in media, property, communications and more. He received the Ernst & Young Entrepreneur of the Year Award.

Denis O’Brien founded the Esat Telecom Group plc and built it throughout the 1990’s until its sale to British Telecom plc for € 2.4 billion.

Denis is the founder of Communicorp, a Dublin-based media group, which includes digital media outlets and radio networks in Ireland, the UK, and Europe. Communicorp operates popular radio stations, including Dublin’s 98FM, as well as the UK’s Heart and Smooth Radio. Bauer Media Group acquired Communicorp in 2021, marking O’Brien’s exit.

Outside of his extensive business interests, Denis chaired the 2003 Special Olympics World Summer Games in Ireland. It was the first time the Summer Games were staged outside the US with teams from 160 countries and over 30,000 volunteers. O’Brien remains the chairman of the Ireland Special Olympics’ Council of Patrons.

Denis is a director on the US Board of Concern Worldwide. O’Brien is also a member of the UN Broadband Commission for Digital Development, which aims to increase access to broadband internet across developing countries in cooperation with the private sector. He also chairs the Clinton Global Initiative Haiti Action Network.

O’Brien founded the Digicel Foundation in Jamaica, Haiti, Papua New Guinea and Trinidad & Tobago to focus on philanthropy and community development. Digicel Foundation helps communities with education and literacy projects, supports people with special needs and assists with community investment and development. Since its inception, the foundation has helped over 3 million people and invested US$156 million in thousands of projects.

In 2000 he established The Iris O’Brien Foundation to identify and assist projects in Ireland and internationally which aim to alleviate disadvantaged communities.

Denis holds a BA degree from University College Dublin and an MBA from Boston College.