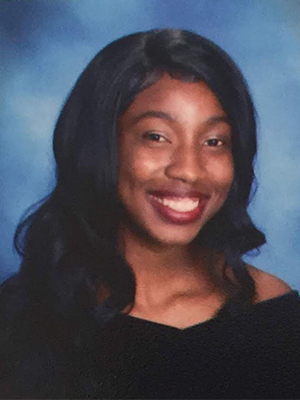 Diana Joseph was born in Port-au-Prince Haiti April 16, on Easter Sunday. Although Diana had left Haiti at a young age, she still inherited the history and struggle with being Haitian. At the age of two her mother realized she wanted her and her brother to have a bright future. They couldn’t really accomplish that in Haiti. Haiti was very unstable, constantly surrounded by witchcraft and her mother didn’t want them to be in a toxic environment. Since her mother and her sibling didn’t have the opportunity to graduate high school, her mother didn’t want to curse her own kids into not having a promising future. Therefore, Diana’s mom brought them to Fort Lauderdale, Florida they eventually left Broward County and moved to the historic city of Lake Worth. Diana was always a curious young girl growing up just like her mom when she was the same age as her. Diana constantly caught herself questioning everything like, why was the sky blue? Why did this person look so different from another person? Why doesn’t it snow in Florida? She constantly wanted to understand everything around her that’s when her mother decided to send her to school to feed her curiosity. Diana attended a small school called South Grade Elementary from kindergarten following her fifth year of grade school. During this time she instantly discovered her unconditional love for the modern arts. She designed gorgeous dresses and had them prominently displayed at local art museums by her art teacher. She next joined the chorus group at her school. She enjoyed it for some time but then transitioned into the likings of musical instruments, where she got to grasp the fundamentals of playing a flute. Diana was a natural. She had performed melodic solos, duets, and trios with her flute. Diana was a diligent worker and on top of her arts, she was extremely athletic. She played soccer, baseball, basketball, kickball and many more other sports. Diana even won “fastest girl” every year three times in a row at South Grade Elementary. But, it was all thanks to her mom. Most of the Diana’s relatives had strong legs and muscle power so, sports were a 6th sense for her. She was and always been an active person. Although, Diana loved her culture many children teased her for it. With her dark skin, kinky hair, and big nose the kids weren’t too fond of them. Coming from a Caribbean culture has also shaped Diana to have high morals for herself. Haitians are known for being catholic but, Diana’s mother gave her children the freedom of discovering their own beliefs of Gods or Goddesses. Diana came to the conclusion that there’s only one God in her eyes but, still likes to read about Greek mythology and different religions. Diana Joseph attended Lake Worth Middle School. Her first year there was pretty chaotic. Diana didn’t really fit in and was still trying to discover her own niche. But, she didn’t let that distract her from her goals. Diana loved science class. Her dedicated teacher was genuinely funny and made her love the subject even more. Diana participated in the science fair every year even though she wouldn’t win she enjoyed the fun in them. She also learned to play the alto saxophone Afterwords Diana started her freshman year of High School. Freshman year she played basketball for her high school team. After that she played on her school’s varsity softball team where she met some of the close friends, she has now. Throughout her high school period, she has studied thoroughly and hard to earn an exceptional grade point average at her high school. Diana has also joined many clubs and empowerment groups at her school and has been extraordinarily active with her community. Currently, Diana is a senior attending a high school in Florida called Lake Worth High School and is currently a Dual Enrolled student at Palm Beach State College. On Diana’s spare time, she likes catching up on her favorite tv shows and writing poetry. She still plays her flute and alto saxophone and is constantly working on applications for college. Her family and heritage have influenced her to become a hardworking young adult that she is.