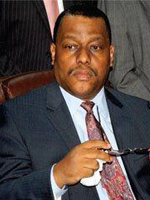 Mr. Conille is an international civil servant with over 20 years of experience in the development sector, an author, and former Prime Minister of Haiti.

He began his career in development in Haiti in 1994 as head of the Haitian Association for National Development, where he developed and implemented a primary health care system for disadvantaged areas in Haiti.

His work in the United Nations system over the past 15 years has included various positions with the United Nations Population Fund (UNFPA), including as National Programme Officer, Regional Advisor for East and Central Africa, Senior Technical Advisor for the Africa region and Coordinator of the Global Programme on Reproductive Health Commodity Security. He has also worked with the United Nations Development Programme (UNDP) in various roles, including as Head of the Millennium Development Goals (MDG) support unit in the Bureau for Development Policy and as UN Resident Coordinator, UNDP Resident Representative and Humanitarian Coordinator in Niger. In addition, he served as Senior Advisor to Liberian President Ellen Johnson Sirleaf in her role as Co-Chair of the UN High Level Panel on the Post-2015 Development Agenda.

Mr. Conille worked on the Millennium Project with renowned professor Jeffrey Sachs, where he led strategies for accelerating achievement of the MDGs.

In the wake of Haiti’s 2010 earthquake, Mr. Conille was seconded as Chief of Staff to the office of the Special Envoy for Haiti, former United States President William J. Clinton, where he helped coordinate Haiti’s reconstruction efforts.

He received a Doctor of Medicine from the Faculty of Medicine and Pharmacy of the State University of Haiti before successfully completing a three-year residency programme at Haiti’s Isaïe Jeanty maternity hospital. Under the prestigious Fulbright Scholarship Program, he obtained a Master of Public Health from the University of North Carolina at Chapel Hill.