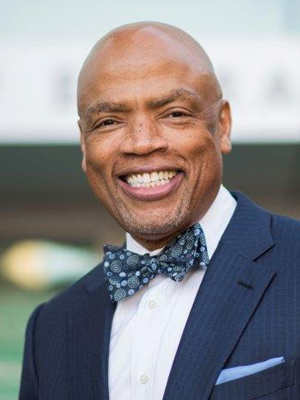 Dr. Ford is a Haitian-born pediatric surgeon who maintains close ties with his native country. In 2010 he traveled to Haiti after the earthquake to provide surgical care to children injured in the catastrophe. Since then, Dr. Ford has returned to Haiti regularly to provide medical care to its residents. In May 2015, he performed the first successful separation of conjoined twins in Haiti, alongside surgeons he helped train.

He was most recently senior vice president and chief of surgery at the Children’s Hospital Los Angeles (CHLA), vice dean of medical education, and professor and vice chair for clinical affairs in the Department of Surgery at the Keck School of Medicine of the University of Southern California. Dr. Ford was professor and chief of the Division of Pediatric Surgery and surgeon-in-chief at the Children’s Hospital of Pittsburgh and the University of Pittsburgh School of Medicine before joining CHLA in January 2005.

Motivated by a deep desire to have a positive impact on the world and drive important change, Dr. Ford has achieved unprecedented success throughout his career. He has conducted groundbreaking research on the pathogenesis of necrotizing enterocolitis, the most common and lethal disease affecting the gastrointestinal tract of newborn infants. His work has led to new insights into the diagnosis, treatment, and prevention of this vexing disease. Under his leadership, CHLA developed a robust, state-of-the-art minimally invasive surgery program.

Dr. Ford’s research has been funded by the National Institutes of Health, the Robert Wood Johnson Foundation through the Injury Free Coalition for Kids, the National Trauma Registry for Children and the American College of Surgeons, among others. He is the author of more than 300 publications, book chapters, invited manuscripts, abstracts, and presentations.