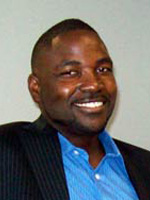 Dr. Belony is a highly gifted experimental physicist with thorough knowledge of non-ideal plasma, high power circuitry, optical spectroscopy, and computational modeling.  He joined the Strayer faculty team in the fall of 2012 to teach Science and Mathematics. Currently, he is a Research Scientist working in collaboration with the Physics Department at Lehigh University; he is also an Associate Editor for the physics book and journal publishing at Versita, and a Collaborator at Massachusetts Institute of Technology (MIT)’s international education outreach program [an educational program led by the Linguistic Department at MIT to train professors in Haiti in the Physics and Mathematics using the TEAL approach (Technology-Enabled Active Learning) and the native linguistic inclusion]. His career path includes being an Assistant Professor of Physics at West Chester University of Pennsylvania and an Adjunct Professor of Physics at the College of Saint Elizabeth. Moreover, he taught Physics at Lehigh University to the (Science, Technology, Engineering, Math)-inclined undergraduates (2004-2010).

Dr. Belony teaches both at the graduate and undergraduate levels. He teaches Physics, Mathematics, and Management Science. He trains students on Linear and Nonlinear Programming, and on the techniques of Project Management, Transshipment, and Network Flow Models. Moreover, he prepares lectures on Energy, Electricity and Magnetism, Atomic Theory of Matter, Statistics, Queuing, and Decision Analysis.

Dr. Belony is currently exploring field of Renewable Energy, specializing in Wind and Oceanic Wave Energy. As an experimentalist and innovator, his scientific insights and tool construction abilities urge him to test the waters in that field. He is currently penning a book on this subject matter.