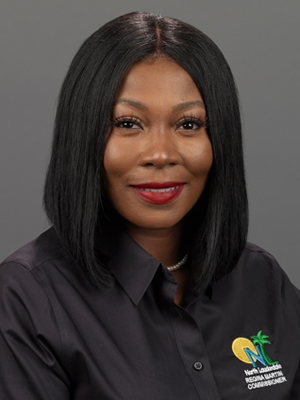 Commissioner Regina Martin is the city’s first African American Caribbean woman to be elected into office. A South Florida native, she is a Pastor, Entrepreneur and Newlywed. Regina and her husband Damion Archat have a total of 5 beautiful daughters, Jazzmin, Olivia, Savanah, Sydney and Syleena.

Regina is the Senior Pastor at Embassy Church of South Florida, Founder and Operator of Embassy College and The Embassy Academy, a K-12 private school, which received a nomination for ‘School of the year’ by I Am Hope Foundation.

Dr. Martin is the author of many books and publications, most notably “Forerunner,” which sold out in the first month of its publishing. She holds a Doctorate in Theology from Galilee Bible Theology School – Institute and an Honorary Doctorate Degree in Christian Business Leadership from the United Graduate College and Seminary International.

Dr. Martin boasts two proclamations from Broward County Government and the City of Tamarac. Both proclaimed “Dr. Regina Martin Day” in their respective jurisdictions in the month of May and March respectively. As a regular staple on local and network television, Dr. Martin has appeared on leading networks to include, The Word Network, Impact Network, Atlanta Live, and Island TV. She has been featured on the Huffington Post, the cover of Kish Magazine and the Kish Corner as Woman of the Year.

Service to people is Dr. Martin’s Impetus. This is evident in her role as a mother, mentor to the thousands she calls daughters and evident in her role as a Pastor at Embassy Church, where she organizes a feeding program that nourishes over 400 families in her community every week. Dr. Regina Martin’s vision and mission is to uphold Civil Rights, promote Diversity and protect and embrace Progressive ideas.