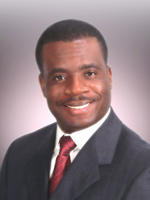 Dr. Smith Joseph was born in Saint-Louis-du-Nord, Haiti. He completed his elementary studies in his native town and went on to achieve his secondary studies in Port-au-Prince, Haiti. In 1979, Dr. Joseph and his family migrated to the United States and settled in Miami, Florida. Thereafter, Dr. Joseph secured a diploma in Laboratory Technology and began employment as a lab technician specialist with the University of Miami/Jackson Memorial Hospital (UM/JMH). In 1988, Dr. Joseph earned an Associate degree in the Pre-Pharmacy program at Miami-Dade Community College. Upon graduating, Dr. Joseph went on to earn a Doctorate Degree in Pharmacy from Florida Agriculture and Mechanical University (FAMU) and is a proud “Rattler.” Dr. Joseph worked as a registered pharmacist at Walgreen’s Pharmacy and later accepted a position as a clinical pharmacist at the Miami Heart Institute in Miami Beach, Florida. In 1998, Dr. Joseph earned a degree in Osteopathic Medicine at Nova Southeastern University and went on to complete a 3-year residency program, with a specialty in Internal Medicine, at Grady Memorial Hospital/Morehouse School of Medicine in Atlanta, Georgia. In 2001, Dr. Joseph opened his professional medical practice on West Dixie Highway, in the heart of North Miami, where he has maintained a successful practice with a growing staff of about 10 employees. On November 4, 2014, Dr. Joseph became the first medical doctor to be elected “Mayor” in Miami-Dade, County

Despite his busy professional career, Dr. Joseph is an active and concerned resident. He delivers scores of motivational speeches at local churches and local schools. Dr. Joseph organized a rally and candlelight vigil in 2012 against gun violence following the shootings of young Trayvon Martin and the Sandy Hook Elementary children. Dr. Joseph was a co-founder of the Society of Haitian American Professionals (SHAP), providing networking support and training to South Florida’s professionals, and has served on the North Miami Community Redevelopment Agency Advisory Board and the City’s Quality Education Advisory Board.

In 2009, Dr. Joseph was inducted in the Miami Dade College Hall of Fame and has received numerous honors and recognitions for his professional and civic accomplishments, including his medical missionary work during the 2010 earthquake in Haiti and others in the Dominican Republic. Dr. Joseph is a diplomat in Internal Medicine, a member of the American Board of Internal Medicine, the American Medical Association, the American College of Physicians, the American Osteopathic Association, the American Board of Disability Analysts, Past President-Association of the Haitian Physicians Abroad (AMHE)-South Florida Chapter, and has been honored by the Who’s Who in Medicine and Healthcare, Who’s Who Among Students in American Colleges.