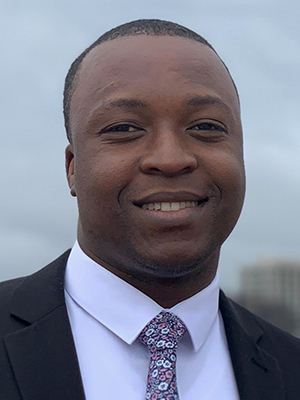 Ern Pierre was born and raised in Port-de-Paix, Haiti where he attended Sonlight Academy – a missionary school that he accredits for his academic and spiritual development. After the devastating earthquake in 2010, he moved to the Dominican Republic to pursue a bachelor’s degree in Business Administration. While studying, Ern also began a career in the business process outsourcing industry. Due to unforeseen hardships, Ern took a break from studying and co-founded a startup called Caribbean Outsourcing Group and joined the launch of a delivery app called Cometelos in the Dominican Republic.

In addition to his experience in the private sector, Ern has served as a volunteer for the Disaster Accountability Project with the United Nations Office for the Coordination of Humanitarian Affairs. There, he worked on promoting transparency in aid geared towards humanitarian response. Ern has also served as a member of the Economic and Social Council Youth Forum at the United Nations. His engagement with the private sector and nonprofit organizations has enabled him to see the impact international development can have on vulnerable populations, particularly in countries rife with corruption.

Ern has recently moved to the United States to pursue his bachelor’s degree in Business Administration at Kentucky Christian University. While working on his degree, he has served as the International Student Representative on the university student council, volunteered with the Black Policy Conference at Harvard University, and interned with a youth development center for people with disabilities. Though the last few years have been challenging, Ern is motivated by his support system and is grateful to NAAHP for contributing to his professional development. He is devoted to keep challenging the status quo and practice altruism by provoking more opportunities for folks that are from the same setting as him.