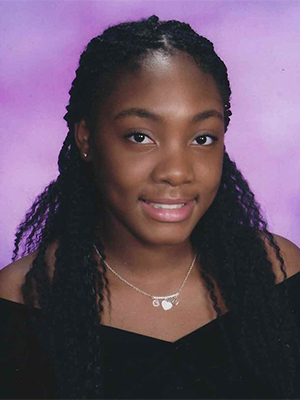 Esther Duclair was born on Long Island, New York. Her mom and dad were both born in Haiti and came to America to seek more opportunities. They both attended college and received their bachelor’s degree. At a young age, Esther was a very bright child who loved and cared for everyone. She was athletic and good at sports. Some sports include soccer, softball, and basketball. In middle school, she played volleyball and was captain of JV during her sophomore year and Varsity during her senior year of high school. Esther was a member of National Honor Society, Students For a Better World, Renaissance, and was president of Tri-M Music Honor Society at her school. She has been in High Honor Roll every year. Esther participated in choir, vocal point, chamber, orchestra, and was concertmaster at school. At the age of 5, she started taking piano lessons. A year after, she performed at various concerts and banquets in the Jesus Saves Ministry. When Esther turned 9, she took violin and voice lessons. At church, she would perform as a soloist. She has represented her school in SCMEA (Suffolk County Music Educators Association) for violin and voice and at LISFA ( Long Island String Festival Association) for violin. After being evaluated by judges, Esther was also selected to represent her school at the New York State School Music Association All State festival in Rochester, NY. She was selected among the best high school musicians of NY state. Outside of school, she was in the NYPUMC Orchestra and the Gemini Youth Symphony. She has performed at various events. Some include Carnegie Hall, Lincoln Center, SPAC, Haitian Flag Day, Haitian Unity Day in the state capital, Five Towns College, and Adelphi Performing Arts Center. She has participated in community service events such as helping out in food drives, benefit concerts, and volunteering at school. Esther will attend NYU and she plans to study music education / voice performance. She would like to inspire and help others through music.