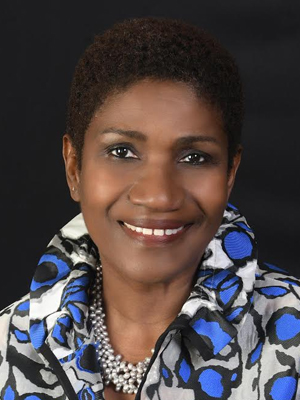 Gepsie Morisset-Metellus is co-founder and Executive Director of the Haitian Neighborhood Center Sant La, an award-winning neighborhood resource center that serves as a lifeline for the Haitian immigrant population of South Florida.

Her many awards from local, state and national organizations include recognition of her exemplary leadership, community service, and her advocacy on important community issues. Some of these include: Women of Impact, In the Company of Women, Miami ICON, Outstanding Americans by Choice, MCCJ Humanitarian, M. Athalie Range Miami Pioneer and Florida International University’s Kal Kovens Distinguished Community Service Medal.

Ms. Metellus is multilingual and has a multicultural perspective shaped by her extensive travel to Europe, Asia, The Middle East and the Caribbean. She’s an alumna of the Rockefeller Foundation’s prestigious fellowship, Next Generation Leaders and of Harvard Business School’s Strategic Perspectives in Non-Profit Management. Gepsie’s motto is “Provide the leadership to get things done!

Born in Port-au-Prince, Haiti, Gepsie M. Metellus migrated to the United States at the age of twelve. She earned a Bachelor of Arts in French/Romance Languages from Queens College, New York; a Master of Science in Modern Language Education from Florida International University and a Post Masters Certificate in Education Leadership from Nova Southeastern University. In 2004, she was conferred an honorary doctorate for community service by the Université Jean Price Mars in Port-au-Prince, Haiti.