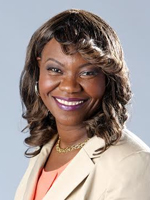 Jacqueline Charles is a Pulitzer Prize finalist and Emmy Award-winning foreign correspondent for the Miami Herald with responsibility for Haiti and the English-speaking Caribbean. She began her journalism career at the Herald as a 14-year-old high school intern and was hired upon graduation from the University of North Carolina at Chapel Hill. Her first overseas assignment – the Return of Haitian President Jean-Bertrand Aristide – came shortly after.

As the Herald’s Haiti correspondent, Jacqueline was again on the front lines for the (second) return of Aristide, and was the first journalist to inform readers of his arrival to the island-nation, just days before Haiti’s historic 2011 presidential runoff. While best known for her consistent and prolific coverage of Haiti, Jacqueline also made her mark as a local Herald reporter covering Miami’s impoverished communities, Broward County schools and government, the Florida Legislature, immigration and social services. Among her prize-winning work: a series of reports on the waste in Broward schools’ construction program and the impact of school crowding. She was a member of the education team that produced the Herald’s award-winning series Unequal Schools: Broward’s UnKept Promise. The three-day series detailed the inequities between predominately black and white schools in Broward County.

Jacqueline is as diverse as the communities she has covered: She was born in the English-speaking Turks and Caicos Islands of Haitian descent, and was partly raised in Miami’s Overtown neighborhood by her Haiti-born mother and Cuban-American stepfather.

In 2006, Jacqueline officially became a full-time member of the Herald’s World Desk. Her assignments have taken her throughout the Caribbean where she wrote about race in Cuba and whale hunting in St. Vincent, and as far away as Italy, Kenya and Liberia.

Jacqueline is a founding member of the Carolina Association of Black Journalists; a past president and scholarship chairwoman of the South Florida Association of Black Journalists and a former assistant director of the University of Miami/Dow Jones High School Journalism Workshop. She currently serves on the University of North Carolina’s School of Media and Journalism’s Board of Advisers.