Former Prime Minister and Minister of Planning and External Cooperation, Republic of Haiti 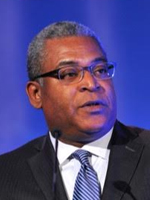 Born in 1958 in Port-au-Prince, Jean-Max Bellerive received his schooling in Europe before returning to Haiti in 1986. In 1990, he founded Sibel Consult, a management and project development agency with some colleagues. He has held several distinguished positions in the Government of Haiti. Between 2000 and 2006 he served as Chief of Staff for Prime Minister Chérestal, Chief Technical Advisor to Prime Minister Neptune and Coordinator of the Coordination and Monitoring Unit for Public Policies, financed by
UNDP and attached to the Office of Prime Minister Latortue.

In 2006, he was called to join the Préval-Alexis Government as Minister of Planning and External Cooperation. On October 30, 2009 he was designated Prime Minister by President Préval, and ratified by Parliament as Prime Minister on November 11, 2009. As Prime Minister he co-chaired with former US President Clinton the Interim Haiti Recovery Commission. He served in that capacity to the end of the Preval mandate in May 2011 and remained as Acting Prime Minister until October 2011.

A committed public servant and strong advocate for sustainable development, he coordinated unprecedented aid and reconstruction efforts following the Jan 12, 2010 catastrophic earthquake, Haiti’s worse disaster. He oversaw the organization of presidential and legislative democratic elections in a challenging context. He is a Founding member of the Vérité Political Party, He is also active with his private consulting firm. Jean-Max Bellerive is married and the father of two.