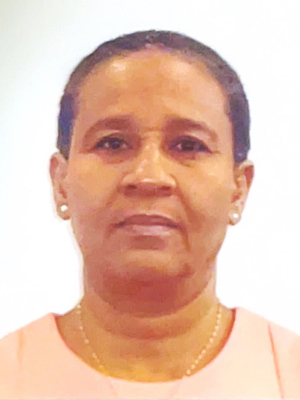 Jeannine Barthélemy-Paul is the co-founder of ViAHSA – Les Villages Apicoles Horizons S.A. (ViAHSA) –, which is a company in the honey field specializing in beekeeping development,
green economy, and ecosystems restoration.

Born in Cap-Haitien on February 6, 1970, she is the fifth of six siblings. Hyperactive and creative, from her teenage years, she devoted herself to manufacturing dolls made of wood shavings for the tourist market at the time when Cap-Haitian used to welcome cruise ships.

Her professional career began in her hometown where she held managerial positions at a very young age. Consequently, due to her rigorous work, she was nicknamed “Margaret Thatcher.”

She worked before at the Canadian Center for International Studies and Cooperation (CECI) as a Logistician for a food aid program. Secondly, she became affiliated with a family business to later integrate the oil sector by working as Assistant to the General Manager of Esso Standard Oil affiliated with ExxonMobil.

Her career with ExxonMobil and then SOL Petroleum allowed her to work with colleagues from Martinique, the Dominican Republic, Barbados, Brazil, and the United States.

These specific skills and her training in Project Management with Wentworth University allowed her to be recruited by HaïtiJob/Compétences 2000 to establish the first Job and Training Fair in Haiti with the support of USAID.

Hence 2011, Aside from being a consultant as well as completing short contracts, she worked with her husband on numerous projects and businesses to create opportunities for youth in the Northern Corridor. She first created FormETIC S.A. an educational governance company, next in order was Paul Agri-business and Culinary (PAC), which initially specialized in the processing of agricultural products and later the processing of honey into mead as well as the marketing of honey, BP Service Subcontracting Center (C-SERV) with the Mille Entreprises Project (PME),

With ViAHSA, she helped train in two years more than 400 beekeepers in the North of Haiti.