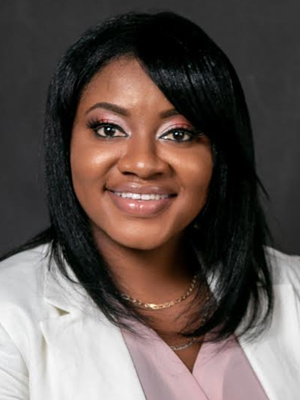 Kassandra Timothe was born and raised in North Miami, a few blocks away from W.J. Bryan Elementary and North Miami Middle where she attended grade school. A true North Miami native, Kassandra lives, works and plays in the heart and pulse of the City in District 2.

Tenacious in spirit, Kassandra began working at North Miami’s Museum of Contemporary Art (MOCA) at the young age of 15. She initially was hired as a summer camp counselor and was promoted through the years by her mentor Bonnie Clearwater to Junior Docent Coordinator, Assistant Camp Director and her last role at MOCA was in 2012, as the General Obligation Bond Education Outreach Coordinator. While the bond was defeated, later that year, Kassandra joined Bonnie and North Miami officials for a trip to Washington, D.C. where MOCA received the National Medal for Museum and Library Services, the nation’s highest honor for libraries and museums that are serving their communities in exceptional ways. Kassandra was able to tour the White House, Michelle Obama’s garden and sat down for her second recorded interview.

Kassandra attributes her passion for politics to her late father who instilled in her the power of hard work. After completing her Political Science studies at the University of South Florida (USF) in Tampa, FL, Kassandra landed her first temporary government gig with Florida State Representative Janet Cruz (now Senator Janet Cruz). During her time in the Tampa and Tallahassee offices, Kassandra was afforded the opportunity to speak out against the closing of USF’s satellite campus and there her passion for policy grew. A more permanent opportunity presented itself in Florida State Senator Arthenia L. Joyner’s office, someone Kassandra admired since seeing her picture in Dr. Susan McManus’s Florida Politics textbook. Kassandra was finally working for her s-hero, a Delta, an attorney and amazing civil rights activist. From slashing funding for student grants and scholarships to watching USF lose millions of dollars, Kassandra knew her passion was government and legislation but one thing was missing, home.

As the Legislative Aide for Councilwoman Lisa Montelione in the City of Tampa, District 7, Kassandra realized the power of local government but she knew this job would be more meaningful if she were home. In May 2015, Kassandra joined the City of North Miami in the Public Information Office, a position she thanks Pam Solomon for selecting and preparing her for. Kassandra and Pam worked briefly on the MOCA’s Bond Campaign and thought she would be the perfect fit for the job, as Pam prepared for her departure. With tough shoes to fill, as PIO, Kassandra became the face and spokesperson for the City of North Miami, a role she knew would later prepare and position her for a run one day. Kassandra planned in her later years to run for office, after her pension was vested, but never imagined the time would be now. But the time is now.

Kassandra has over ten years of governmental experience and is ready to take her experience to the mountaintop. She graduated in 2012 with a Political Science degree from the University of South Florida and in May 2020, from Florida International University with her Masters in Public Administration. Kassandra is a loving daughter, spirited sister and amazing auntie who’s ready to change the world. Starting home with North Miami…