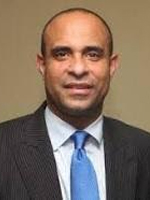 Laurent S. Lamothe successfully served as Prime Minister of Haiti between May 2012 and December 2014, the longest tenure of any Haitian Prime Minister in the last three decades. During his time in office, using innovative financing, Lamothe presided over the design and implementation of an important social policy agenda that targeted the most vulnerable sectors of the Haitian population. Lamothe also presided over the largest infrastructure development in recent memory that included schools, bridges, roads, and which are now clearly visible throughout Haiti.

Additionally under Lamothe foreign direct investment increased to the highest level since the fall of the Duvalier dictatorship in the mid 1980s. From 2011 to 2013, FDI increased by 56% compared to the 2006-2010 period. Under his leadership Haiti pursued reforms that made Haiti a safer and more business-friendly country including 15-year tax holidays and tax breaks to companies investing in the island nation, and increasing the police force by 30 percent.

Lamothe brought to the office of Prime Minister an entrepreneurial spirit and dynamism that earned him the title of “Entrepreneur of the Year” by Ernst and Young in May 2008. More recently in November 2014, Latin Trade magazine recognized his innovative skills by naming him the year’s Innovative Leader of the Americas. Latin Trade noted that Lamothe “helped establish a paradigm shift for Haiti as a destination for investment, rather than simply for humanitarian aid. “

Having grown up in a country affected by poverty and lack of resources at all levels, this savvy businessman has developed throughout his life a deep sense of social responsibility and a strong tendency to assist those in need. Lamothe is a pragmatist who throughout his role in the public sector emphasized practical solutions over partisan politics to address the urgent needs of Haiti.

Lamothe obtained a Bachelor of Arts in political science from Barry University in Miami and in 1996 earned his MBA with honors from University of St. Thomas. In 1998 Lamothe founded Global Voice Group SA (GVG) considered today a world-leading provider of ICT solutions for telecom and fiscal authorities. He served as CEO of GVG until he stepped down to assume his public sector duties with the government of Haiti.