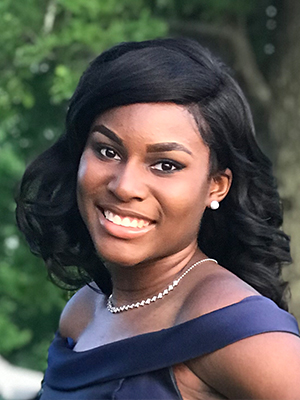 Lauryn Cadet is a first-generation student that will be attending the William F. Connell School of Nursing at Boston College this upcoming fall to major in nursing. Lauryn’s aspiration to work in healthcare developed through her admiration for the immense role nurses play in the quality of life of their patients as well as her passion for being an advocate for the vulnerable and those who have yet to develop the courage to speak and advocate for themselves. Lauryn was born in Cambridge, Massachusetts but her parents were both born and raised in Les Cayes, Haiti. Lauryn has an immense love and appreciation for her parents as they left their familiar homes in Haiti and came to a country foreign to them, so she could live the life they were not fortunate enough to live. She has visited Haiti many times to visit her parent’s home town and is astonished by its beauty. She believes that Haiti can be a great and stable country, one known not solely for its poverty but for it’s great treasures. She is proud to call herself a Haitian-American

Lauryn hopes to open her own practice someday as well as open a nonprofit clinic in her parent’s home town of Les Cayes, Haiti to provide proper health care to those in need.

In high school, Lauryn was involved in various activities such as her school’s Varsity Basketball Team and Step Team, Secretary and Co-founder of “Let’s Chat,” a social awareness club that provided a safe space for students to discuss controversial issues in the media. She also volunteered as a Math and French tutor and lead STEM based lab activities for 5-12-year-old children.