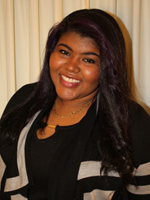 Leanna is the 20 year old CEO of Leanna’s Inc., a hair & body care products company she started at the young age of 9.

Leanna has dedicated her life to being a motivational speaker and sharing her wealth of knowledge to her peers. Her profile includes having conducted business lectures and classes at the University of West Alabama, Binghamton University, Columbia University, MIT and the New Jersey Institute of Technology. She also participated in the “What Makes a Young Champion Summit” in Singapore and the 2010 Apple Leadership Summit as a panel member.  Leanna was flown to the U.S Virgin Islands and was honored to be the keynote speaker for the YWCA.  Leanna became the youngest person at the age of 13 to ring the NASDAQ opening bell on Wall Street.   She has been highlighted by media outlets such as FOX Business, The Today Show, NBC, ABC, BBC UK World Service, and CNN. Leanna has also been featured in several magazines such as Forbes, Time, INC. Magazine, Success Magazine, Ebony, Jet and Glamour, to name a few.  Leanna has been profiled on the Celebrity Networth website & set with a networth of $5 million as of 2016.

Leanna’s list of achievements include being a Janet Jackson “20 under 20 Honoree” and honored on the BET’s Black Girls Rock award show in 2011.  She also received The Grio’s 100 class of 2012 Business Award, the Caribbean American heritage Visioneur award in 2013 & a Youth Honoree recipient of the 2013 McDonalds 365Black Award. Leanna was also honored as a recipient of the 2015 Caribbean Life Impact Award.

In 2008, Leanna founded the Leanna Archer Education Foundation in Haiti, where her family is from.  Her organization is dedicated to providing 3 meals a day and an education to nearly 200 children in a safe environment. LAEF also focuses on developing each child’s vocational talents and skills, in hopes to provide them with the tools for a better future, doing what they love.