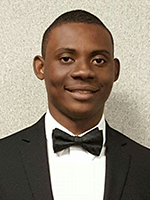 Mr. Lesly François Veve moved from Haiti in January 2015, after he finished high school, to pursue his education in the United States. His passion for Mathematics, and the automotive manufacturing processes led him to major in Engineering. Mr. Veve is 19 years old and he is graduating with Associate of Science in Engineering Technology from Georgia State University at the end of 2016. He already won several excellence and leadership awards like the Student of the Semester Award, the STEM Scholar Award, the Student Government Association Award, and the Haitian Leadership Award due to his dedication to academic performance and advocacy on behalf of the student body at his college. He is an inducted member of the National Society of Leadership and Success and of Phi Theta Kappa International Honor Society. He currently tutors Mathematics and Science at his college and is an elected President of the Senate for the Student Government Association at Georgia State University. He intends to soon transfer to a technical University to obtain a bachelor in Industrial & Systems Engineering. Mr. Veve strongly believes that there is a brighter future for Haiti and he wants to acquire all leadership skills and expertise that will help him participate in the economic development of his country.