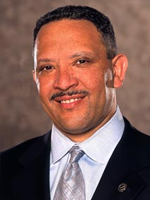 In a distinguished professional career that has spanned 25 years, Marc Morial has performed all of these roles with excellence, and is one of the most accomplished servant-leaders in the nation.

As an Entrepreneur, Morial started several successful small businesses — an apparel wholesale company, a special events company, and a janitorial company, his first venture at age 15 with two childhood friends.

As a Lawyer, Morial won the Louisiana State Bar Association’s Pro Bono Publico Award for his legal service to the poor and disadvantaged. He was also one of the youngest lawyers, at age 26, to argue and win a major case before the Louisiana Supreme Court.

As a Professor, Morial served on the adjunct faculty of Xavier University in Louisiana, where he taught Constitutional Law, and Business Law.

As Mayor of New Orleans, Morial was a popular chief executive with a broad multi-racial coalition who led New Orleans’ 1990’s renaissance, and left office with a 70% approval rating.

With vigor and creativity he passionately attacked his city’s vast urban problems. Violent crimes and murders dropped by 60%, the unemployment rate was cut in half, and New Orleans’ poverty rate fell according to the 2000 Census.

The city’s economy experienced its most dramatic growth in over 20 years as the Convention Center was expanded, thousands of new hotel rooms were built, the Downtown Casino and Sports Arena opened and New Orleans hosted Super Bowls and Music Festivals, as well as International and Hemispheric Summits. The NBA also returned to New Orleans as he led the effort to relocate the Hornets from Charlotte.

During his tenure, New Orleans won the All-American City Award in 1996 for the first time in 50 years, as well as the prestigious City Livability Award, and finished first in the National Night Out Against Crime Competition on two occasions.

He produced eight balanced budgets, and led the passage of a new City Charter which authorized the creation of a City Revenue Estimating Conference, an Ethics Board and Inspector General.

Elected by his peers as President of the bi-partisan U.S. Conference of Mayors (USCM), he served during the 9/11 Crisis and championed the creation of the Department of Homeland Security, and the Federalization of airport security screeners.

The USCM achieved unparalleled visibility and prominence under his leadership.

As President of the National Urban League since 2003 he has been the primary catalyst for an era of change — a transformation for the 100 year old civil rights organization. His energetic and skilled leadership has expanded the League’s work around an Empowerment agenda, which is redefining civil rights in the 21st century with a renewed emphasis on closing the economic gaps between Whites and Blacks as well as rich and poor Americans.

Under his stewardship the League has had record fundraising success towards a 250MM, five year fundraising goal and he has secured the BBB nonprofit certification, which has established the NUL as a leading national nonprofit.

His creativity has led to initiatives such as the Urban Youth Empowerment Program to assist young adults in securing sustainable jobs, and Entrepreneurship Centers in 5 cities to help the growth of small businesses. Also, Morial created the National Urban League Empowerment Fund, which has pumped almost $200 million into urban impact businesses including minority business through both debt and equity investments.

A graduate of the prestigious University of Pennsylvania with a degree in Economics and African American Studies, he also holds a law degree from the Georgetown University Law Center in Washington, D.C., as well as honorary degrees from Xavier University, Wilberforce University, and the University of South Carolina Upstate.

He serves as an Executive Committee member of the Leadership Conference on Civil Rights, the Black Leadership Forum, and Leadership 18, and is a Board Member of the Muhammad Ali Center, and the New Jersey Performing Arts Center.

Morial, a history, arts, music and sports enthusiast, has an adult daughter, and is married to broadcast journalist Michelle Miller. Together they have two young children.