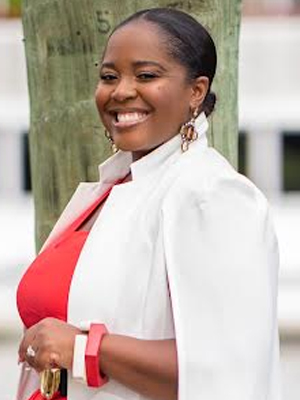 Merline “Mimi” Thermora Saint Juste humble beginnings began in Port Au Prince Haiti. She left her beloved native land at the age of 15 for the United States where she first moved to Boston, Massachusetts where she completed High School. Now long after that, Merline moved to Florida to live with her mother where contemplated going into the medical field as it was her parent’s ultimate wish for her.

However, as a young girl, Merline was known for being a fashionista. She was always playing dress-up and was known for her splendid outfits at her schools’ no uniform days also known as “La Journee De Couleur”. She would purchase countless fashion magazines, pay attention to people’s outfits studied pieces from New York’s Fashion Week and try to replicate pieces together in her own coordination and styles.

After much pondering and thinking Merline quickly realized that her heart and passion did not lie within the medical field and from there she decided to pursue her goals in the field of fashion and business. While in Florida, Merline enrolled in school with a major in Fashion Merchandising. Her academic career in Fashion Merchandizing stirred up a desire for her to birth her own fashion brand and online boutique called “Mimi’s BoutiQ”. Mimi’s Boutiq became a rapid success in Southern Miami. Merline’s well- acclaimed fashion show was first hosted in 2011and has become an annual event not only in Miami but in New York City as well. Mimi’s BoutiQ annual fashion show has hosted up to 600 attendees and countless celebrities and musical artists from America and Haiti. Mimi also had a chance to participate in Couture Fashion Week in Nyc twice where she was able to work behind the scenes with some amazing designers and models. In November of 2016, Mimi started her own blog focusing on fashion, business enterprise, motherhood, marriage and other inspirational topics.

For Merline’s skills sets expands beyond fashion entrepreneurship but aims to highlight women’s empowerment and strength for female entrepreneurs and professionals especially in the Haitian American community. In 2016, Merline and team hosted the first Mimi’s BoutiQ “For the Women by the Women Brunch” where well known professional and artists have been invited to speak on important topics relative to women such as finances, business innovativeness, and health topics such as cancer and more. The annual brunches are highly anticipated event that many women look forward to attend to benefit from the workshops and motivational lectures. Merline is currently working on her first women’s brunch in Boston in hopes to reach out to more women and connecting with them by spreading more togetherness amongst women in the community.

Merline has outgrown herself as a speaker for the past few years and hope to bring changes and awareness by sharing her knowledge and experiences. She is a blogger and blogs about mom life, fashion and lifestyle. She has also relaunch her online website (Shop MimiBoutiQ) and turned it into a women’s plus size online shop. Her online shop along with her styling expertise gives women the confidence to love their body and shop without the fear of not being able to find something to wear.

Merline received several awards for her hard work in the community and one of them being YOPro 20 under 40,. This awards is selected for young professionals under 40 doing great work in our community. She also had the opportunity to be part of the NAAHP, an annual conference for the Haitian Americans progressing and moving forward with Haiti and its development. To add more, she received an Award from the Prestigious Award this past January and has been featured in countless of magazines.

Merline Thermora is 21st century trailblazer in the growing fashion business community and relentlessly seeks to lift up and motivate other women in her community. She is the wife to her number one supporter Mr. Sadrac , the mother of two toddler boys and a woman of faith. With the support of her family, team and peers Merline seeks strength daily to expand her brand and to help others. She has a saying that she follows and shares often with those around her that says” in life there will be curves, there will be tears, people will give up on you but as long as you have God and you don’t give up on yourself, There’s nothing that you cannot do”. Merline Thermora Saint Juste is living testimony of this statement.