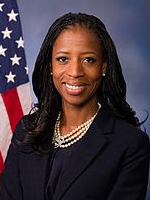 Representative Mia Love was born in Brooklyn, New York and eventually moved to Connecticut. Rep. Love recalls both her parents working hard to earn a living. Her father, at times, worked more than one job to pay school tuition for his three children. On the day of Love’s college orientation, her father said something to her that would become the mantra for her life:

“Mia, your mother and I never took a handout. You will not be a burden to society. You will give back.”

Rep. Love graduated from the University of Hartford with a degree in fine arts. She moved to Utah and married her husband, Jason Love. She was eager to carry forward her father’s ethic of ‘giving back’.

Rep. Love served two terms on the city council of Saratoga Springs, one of Utah’s fastest growing cities. As City Councilwoman and eventually Mayor, she led the city through a period of 1700% population growth in a decade. Under her leadership, the city was able to successfully navigate the drastic transition from agricultural fields to a booming residential community. When the citizen growth necessitated fire and police services, Love fought to make sure the cities first ever residential tax implementation would only pay for those essential services, and she structured it in such a way that the tax decreased as a percentage of property value.

Rep. Love is best known for her conservative positions on limited government, increased citizen liberties and limited restraints on business. She believes the best thing she can do as a Congresswoman is to urge the federal government to stay out of the way of business and out of the lives of citizens. She advocates a return to the personal responsibility and reduced government dependency, again a value engendered by her father.

She felt so deeply about these convictions, she ran for Congress in 2012, and again in 2014 where she was victorious. In her freshman session of Congress, Representative Love has been very busy keeping the promises she made to her constituents in the 4th district by voting to foster local control in all aspects of government.

Congresswoman Love has sponsored 10 bills, one of which passed the House of Repsresentatives in April, 2016. (H.R. 3791 would give more small banks the flexibility to lend money to consumers.) She is the co-sponsor of more than 160 additional bills, including legislation that promotes local control of education, free market solutions to our healthcare crisis, and cutting the regulatory burden that the federal government has imposed on small businesses.

In her freshman year, she is serving on the Financial Services committee, and on the Monetary Policy and Trade, and Financial Institutions and Consumer Credit subcommittees. Rep. Love is also serving on the Select Investigative Committee on Infant Lives.

Based on her votes, she has been honored to accept the U.S. Chamber of Commerce ‘Spirit of Enterprise Award’, the American Conservative Union’s ‘Award for Conservative Excellence’, the IFDA’s ‘Thomas Jefferson Award’, and the Susan B. Anthony List’s ‘Marilyn Musgrave Defender of Life’ award.