Member of the Board, Banque de la République d’Haïti 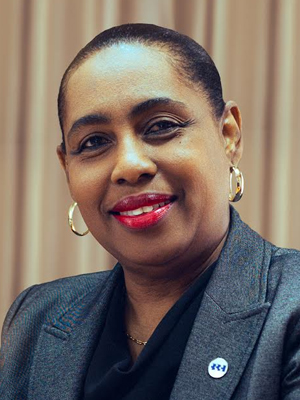 Myrtho René studied Management and Communication at Howard University, Washington. In 1995, she began her professional career in the private financial sector where she held numerous positions, notably in credit administration and human resources management. From 1998 to 2001, she worked in credit administration at the Société Financière Haïtienne de Développement S.A (SOFIHDES), and as Director of Human Resources (2005 – 2007) at a microfinance institution, Action pour la Coopération avec la Micro-Entreprise (ACME). In 2007, she received a Certificate of Merit for her years of service.

After a year at the Sogebank Foundation as Administrative Director, she was recruited in March 2008 by the Banque de la République d’Haïti (BRH) as a consultant to the Board of Directors.

In June 2012, she was chosen to coordinate a national school feeding program, Programme National de Cantine Scolaire (PNCS). Her dynamism and four years of management of this program earned her a Certificate of Merit. She later joined the Ministry of Women’s Affairs and Rights as Director General (March 2017) where she contributed to the fight for gender equity and women’s rights. She will be appointed Member of the Board of Directors of BRH by presidential decree in August 2019.