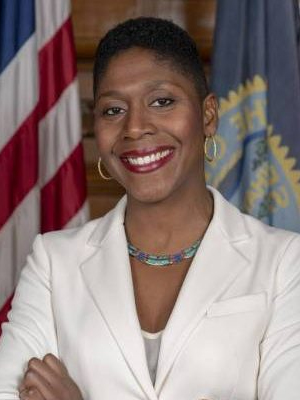 Councilwoman Nirva R. LaFortune is a Providence City Council Member representing the city’s third ward and is the first Haitian American to hold elected office in the state of Rhode Island. She was sworn in August 2017 following a special election. During her first term she served as the Vice Chair of the Special Committee on Education. . She currently serves on the City of Providence COVID-19 Recovery and Resiliency Task Force , and is a members of the Committee on Claims and Pending Suits and the Committee on the Charles V. Chapin Memorial Award.

Born in Port-au-Prince, Haiti, Councilwoman LaFortune migrated to Providence, Rhode Island at the age of three and

was raised in the Southside and later Washington Park neighborhoods, where her parents still live.

She attended Providence Public Schools, including Pleasant View Elementary, Nathanael Greene Middle School and graduating from Mount Pleasant High School. She holds a B.A. in Communications from Temple University and a Master’s in Urban Education Policy at Brown University.

Councilwoman LaFortune has championed affordable housing, support for minority and women-owned businesses, community development, prudent financial planning, and increasing transparency and community engagement in municipal affairs. She serves on the Board of Directors of the Sophia Academy and We the Village, as well as serving on the Advisory Committees for the Eastside YMCA and East Side Community Alliance.

Councilwoman LaFortune lives in Hope Village (Summit) with her two children, Messiah and Nyree-Simone, and is an avid runner; she can often be seen running the streets of her ward.