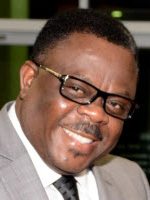 Noel & Cecibon Productions prides itself in bringing to South Florida, quality entertainment through several musical events throughout the year, including one of the largest outdoor festivals in the United States, the Haitian Compas Festival. Now in its 20th year, the Haitian Compas Festival has become a dynamic tradition for visitors, locals and the diaspora to enjoy.  The festival has gained such great heights that it will soon be featured in the island of Martinique, spreading the passion and pride of the Haitian culture to a much wider reach within the Haitian Diaspora.

Owner Rodney Noel, alongside his partner Jean Michel Cerenord are known as icons in this community for not only their popularity but they are each respected for their know-how and keenness to create something new and exciting in Miami. Born in Port de Paix, Haiti, Rodney finished his schooling in Haiti before moving to Miami in January 1990.

Meeting Jean Michel in 1992, the duo has been inseparable since. Starting Noel & Cecibon Productions as diehard music fans, they never expected to still be going strong after more than two decades in the community. Known in the Haitian community throughout the United States, Haiti and Europe as more than a promoter, Rodney is an entrepreneur and a forthright businessman. From starting Noel Records in 2000, managing one of the most popular young bands in the business with Harmonik in 2008, and as a restauranteur with the popularity of Moca Café since 2011. Many people think he has a secret recipe to his success, but in reality, it is the mixture of perseverance and resolve that keep pushing him to move the Haitian Music Industry forward.

As a community advocate, many civic leaders have leaned on his networking prowess to help create a better City of North Miami and Miami-Dade County as a whole. His passion for change, development and innovation continue to drive him to make a difference and together with his wife and children he is proud to have been blessed by God to keep forging forward. The beauty of being Rodney Noel, is that no one ever knows what he is going to come up with next.