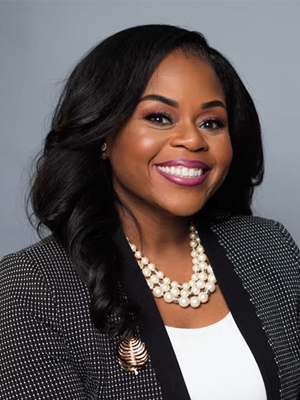 Mrs. Sheila Cherfilus-McCormick is an advocate, an executive, philanthropist, mother, wife and an overcomer. Sheila has invested 20 years into building healthcare for Americans who need it most. She has spent the last decade lobbying on Capitol Hill to drive positive change in Health Care Reform. As the innovative CEO of a company that provides home-based continued health care, teaches families how to care for their loved ones, and provides vocational training in the medical field, Sheila has seen first-hand the hardship our families are experiencing without access to health care.

In 2018, Mrs. Cherfilus-McCormick became the first Haitian American woman to run for Congress in Broward and Palm Beach County. She was part of a national movement of women committed to taking back the House of Representatives for working families. Although, she did not win the Primary, Sheila made history when she secured close to 30% of the votes within 3 months from a 26-year incumbent and only spent $30k.

Sheila Cherfilus-McCormick has recently announced her candidacy in the 2020 elections for the United States Congress Representing Florida’s 20th District. She believes that the community needs real change that will allow our families and community to thrive. Our country is in the middle of a pivotal shift in which our commitment to freedom and equality are being tested. Our generation must ensure that women are paid the same, aren’t penalized for being working mothers and that sexual and racial disparities in the workplace and judicial system are rectified.

Sheila is a proud graduate of Chaminade-Madonna College Preparatory, Howard University and St. Thomas University School of Law. In addition, she completed extensive coursework toward an MBA from the University of Maryland University College. While completing her Juris Doctorate at St. Thomas University School of Law, Sheila was recognized as Best Oralist. In the Spring of 2019 Sheila was recognized as Miramar’s Progressive Woman of the Year! Sheila is one of the Founding members of the Cherfilus & McCormick Foundation, whose mission is to empower the community through initiatives, education, service, scholarship opportunities and leadership training.

Sheila’s family is her proudest achievement. Before joining forces with her husband, Sheila was a single mother for twelve years. During that time, she raised her daughter alone while completing course work while working towards a Master’s in Business Administration and putting herself through law school with her daughter’s learning disability. Sheila was told that her daughter would never be able to attend a regular school. Out- of- pocket medical expenses piled up. But together, they persisted in the face of adversity. (Today her daughter is enrolled in an honors pre law program preparing to pursue a career in law).

Sheila has endured numerous hardships throughout her life and has overcome. This combination has made her relentless, especially when it comes to fighting to ensure that everyone has a fair shot to succeed without discrimination, intimidation or retaliation. She is ready to do the work that’s required to transform the future of Broward and Palm Beach County.