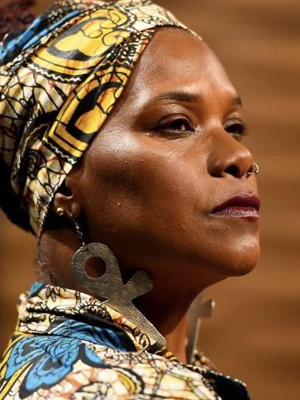 Yvette Modestin- Lepolata Aduke Apoukissi- Empress Modest-I is a writer, activist, poet, storyteller born and raised in Colon, Panama. Ms. Modestin was named one of “30 Afro Latinas you should know.” She is Founder/Executive Director of Encuentro Diaspora Afro in Boston, MA. Ms. Modestin has been profiled by the Boston Globe as “The Uniter” for her work in bringing the Latin American and African American community together and for her activism in building a voice for the Afro Latino Community. She was named an “Influeyentes” in Panama for her advocacy in bringing attention to the struggle of the black communities in Panama with a focus on her home province of Colon. Ms. Modestin is the Diaspora Coordinator of the Red de Mujeres Afrolatinoamericanas, Afrocaribeñas y de la Diáspora, an international network of Afro descendent women. Ms. Modestin received the ‘Lifetime Achievement Award’ from El Mundo Boston newspaper, one of the oldest Latino newspapers in New England in October 2021. In 2019 Ms. Modestin received the inaugural “Every Woman is an Activist ” Award from March Forward Massachusetts.

Ms. Modestin is the co-author of the Boston City Council ordinance to create a Reparations Commission.